Beermat of the Week

When I was still at work a colleague who was about to retire presented me with a box full of old beer mats he'd collected over the years. When I retired in 2018 I brought them home with me and have only just had a proper look at them.  There are some real relics in there and each has a story to tell so I thought I'd select one each week and relate the story of the brewery and the beer. 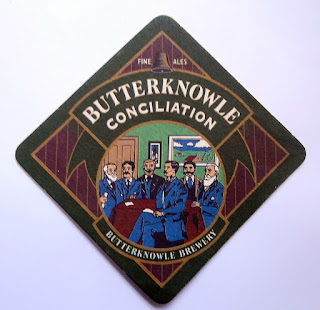 I'm guessing most people reading this won't have heard of Butterknowle Brewery but in their day some quite significant beers were produced. The brewery was set up in August 1990 by John Constable and was based in the old buildings of the Lynesack National School near Butterknowle in County Durham. These buildings dated from 1852 and had been disused for 30 years.

The brewing kit, with a capacity of 100 barrels a week, came from the defunct New Forest Brewery which had closed in 1988 and the brewery was opened by 'celebrity botanist' David Bellamy.

The brewery was an immediate success and won awards from beer festivals across the UK. Just two years after setting up, Butterknowle beers came runner-up in both the Bitter and Best Bitter categories at the 1992 Great British Beer Festival. Banner Bitter also went on to win Gold in the Best Bitter category at the 1996 GBBF.

A bottling line was installed in 1995  and a visitors centre opened in the old infants' classroom. By 1997 around 150 outlets were supplied nationwide, both directly or via wholesalers. Then it all came to a halt and the brewery closed in 1998.

What was significant about Butterknowle beers was level of hopping. Conciliation Ale (4.2%), mentioned on the beer mat, was the flagship brew described in the 1993 Good Beer Guide as:

"..a full flavoured premium ale, well-hopped in both aroma and palate. Flowery and piquant."

You got more of the same in the potent High Force (6.2%). And there's the rub. This was the time was Brendan Dobbin was making waves with his West Coast Brewery in Manchester while, over in Harrogate, Sean Franklin was doing the same with Roosters. Butterknowle beers were up there with them (I know, I was drinking them at the time) with a reputation for powerful, floral hop character. However, while West Coast and Roosters beers have become the stuff of legend, Butterknowle has passed into obscurity. Hopefully this post may, in some small way, start to put the record straight.

I honestly don't know - I do seem to recall being surprised to learn they had stopped. Possible that old enemy, cash flow.

As I recall they did a deal with ex-Whitbread brewers Castle Eden to share the Castle Eden brewery. From then they seemed to fade out of the picture. The beers were splendid.

Hi Chris - yes I noticed a reference to the Castle Eden connection. As you say they seemed to fade out almost unremarked which is odd given how good their beers were.

Their beers were, indeed, very good. And they produced some impressive pump-clips, far more elaborate than the beer-mats.

Rings a bell with me. Did their beers ever make it to Stockport Beer Festival ?

Yes, I believe we had one or more Butterknowle beers over the years.