This is billed as an "American DIPA", or double IPA. At 8% there are some who might complain that it's too weak for that "style".  Who cares as long as it's a good beer?  And as we shall see, this is a bit of a star turn. 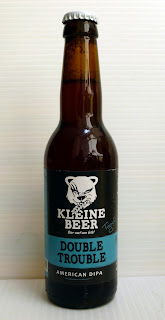 First a bit about "Little Bear"  (go on, who thought "beer" meant, well, beer?). It's based in Lemmer in the north western province of Friesland, an independently minded part of the Netherlands which has its own official language, Frysk, and flag. The national beer revival has been slow to catch on here although among the province's 14 breweries and "brouwerij huurders" it does boast one of the longest lived of the new wave Dutch brewers.  De Friese Bierbrouwerij was founded way back in 1985 and is still going strong (their Dubbel Tarwe Bier was one of the first new wave Dutch beers that made me sit up and take notice).

Kleine Beer started in 2014 and the people behind it are Bernd Beesma and Marcel Top. They have a small pilot kit and once a recipe has been perfected it's brewed elsewhere - so far all of the beers seem to have been made at another Friesland newcomer, Admiraal BierBrouwerij Aldtsjerk.  The core range comprises three beers: a blond (De Beer Uit Lemmer), a dubbel (LE-4) and this little beauty.

The label is very informative and tells us that the malt grist comprises Pale Ale, Pils and Pale Crystal malts. So we get a medium copper-amber beer. Now some of these very big IPAs have an almost condensed tropical fruit aroma which I must say I'm liking less and less these days. Luckily there's none of that here - instead there's a whiff of bitter and resinous hops which is a hint of what's to come. The hops are Cascade and Chinook and together these create a notable and lasting bitterness just nicely underpinned by the malt which gives that slight balancing sweetness in the background.  You can taste almost every one of the 80 EBUs here. The finish is bitter and moreish. I'll be buying more of this when I'm next in the Netherlands.

On a food matching note this pairs well with Babyback Ribs. I only know this because the label tells me that as well. There's a recipe on the website!

Posted by John Clarke at Wednesday, August 26, 2015 No comments:

After last week's look at a rather old school beer here's a beer from Oldskool Brewery. It's a hopfen weiss which is to say a south German-style wheat beer loaded with hops. That might be something of a generalisation but you get the picture.  Now I'm not a huge fan of the usual Bavarian weissbier - I really don't get along too well with the banana-clove-bubblegum stuff. Give me a dunkel or a helles any day of the week. However a hopfen weiss is a rather different animal. That big hit of hops really does it for me. I first encountered the style at a Schneider night at Common Bar in Manchester and was pretty much blown away. More recently Manchester's Cloudwater Brewery has produced some pretty stunning examples. 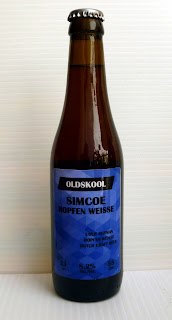 Oldskool Brewery is another Dutch "brouwerij huurder" - a brewer without a brewery. Nothing wrong with that - some of the best beers in the Netherlands have (and do) come from brewers who don't have their own kit.  Oldskool is based in Eindhoven (the home of Philips) and is the project of Dennis Kort who develops his beers at home and then gets them made at a commercial brewery. He's been doing this since 2013 and has had his beer made at Rodenburg, Maximus and, mostly, De Hemel in Nijmegen, which is where this one comes from.

There have been a number of "single hop" hopfen weissen from Oldskool and I tried the Mosaic version after the beer festival in Delft. In fact this isn't "single hop" as the grist includes Spalt Select and Hersbrucker alongside the Simcoe, which of course plays the starring role. It's 8.2% and a copper-amber colour - a bit bock like in fact. This is an initial impression that doesn't go away as you drink.  There's some sweetness and while the hops don't dominate they certainly add to the overall balance with a hint of tropical fruit and a decent bitterness at the end. It's quite full bodied too.  So, while there wasn't the huge hop hit I was half expecting it was overall a satisfying and enjoyable beer. I'll certainly be trying more of these.
Posted by John Clarke at Wednesday, August 19, 2015 No comments:

De Pelgrim has been around since the early days of the Dutch beer revival having been founded back in 1996.  It's based in the attractive Rotterdam suburb of Delfshaven which is the place where the Pilgrim Fathers gathered before leaving for America in 1620.  The Pilgrim Father's church is still there and the Mayflower's passenger list is on the wall.  As you may expect it's something of a tourist hot spot for American visitors to the Netherlands,

The brewery and its tap are next door to the church and occupy one building with the brewery on one side and the cafe-cum-restaurant to the other. Last time I was there (which was a few years back now) we sat outside on the very pleasant terrace.  It's all well worth getting the Rotterdam Metro to Delfshaven to while away a couple of hours or so.

On to the beer. The Pelgrim range has always struck me as solid and well made but not necessarily the most go-to beers in the Netherlands. I do see from the website though that they have been winning awards for their autumnal and winter beers so obviously waves are being made. 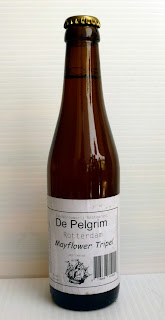 A few years back they got a new brewer and it was about this time I tried something from them at Tilburg beer festival and which made me sit up and take notice. I was told it was an "Amarillo Tripel" and it was pretty damn good I must say.  So I picked this up hoping for something along those lines and to be honest I was a little disappointed. There was very little on the nose and the beer itself while nicely clean was essentially quite a sweet affair with the occasional hint of barley sugar. The finish was also short and sweet. I was hoping for something spicier and hoppier. All in all a perfectly good mid-gold tripel but nothing to get excited about.

However having said all of that I'm still a bit confused about this beer. RateBeer tells me that Amarillo Tripel (at 7.8%) has been "retired" and has separate reviews for Mayflower Tripel (at 7.2%).  The bottle in front of me declares its strength at 7.8% while the brewery website (as you may see) lists Mayflower Tripel at 7.3% and also tells me that Amarillo hops are added at the lagering stage (so it's dry hopped then I guess).  Clearly some tinkering has been going on here and to be honest I'm not sure it's all been to the best effect. I think a return visit to Delfshaven is in order to see what the beer's like on site.

Right, this is a black IPA so let's just talk about that for a moment. I know there are some writers out there who kind of roll their eyes at the term "black IPA". How can an India Pale Ale be black?  Well if we're going to be picky I suppose it is a contradiction in terms. But - it is also useful shorthand to describe beers which combine a dark malt presence with a hop forward character and I for one have no problem with that. Rather this than the clunky "cascadian dark ale" favoured by some.

It's also a style of beer that's easy to get wrong.  There needs to be a fine balance between that malt and hop character I think. Too much hop and the dark malts are almost an unnecessary accessory. To much dark malt character and you have something more akin to a hoppy stout.  When it's done right though I find these extremely appealing beers.

So, HillDevils. They are based at Wouwse Plantage which is in the far south of the Netherlands in North Brabant - indeed they are very close to the Belgian border.  The people behind this are Theo and Marleen van Eekelen and they've been producing their beers since 2013. I don't think they are full time brewers, and indeed they are "brouwerij huurders" or brewery hirers insofar as they don't have their own kit at the moment. The labels tell me their beers are currently being made at Dorpsbrouwerij de Pimpelmeesch in fact.

Although they've been around for a couple of years I didn't come across them until the 1st Dutch Craft Beer Festival at Enschede in May. I normally flit around from bar to bar at beer festivals but enjoyed their beers so much I hung around and tried the range. It was really my sort of stuff - IPAs, Black IPAs and Double IPAs - some aged on oak chips as well. Lovely beers.

Lovely people too. I got talking with Theo and totally unprompted he said he'd send me some beers. Sure enough a couple of months later a box arrives with five bottles (4 x 33cl and 1 x 75cl plus a glass, some beer mats and stickers). This was one of the beers he sent me so here's where I insert the pious disclaimer about it not affecting my opinion of the beer etc, etc, etc. So, having got that out of the way let's get on to the beer.

The label tells you everything you need to know.The malt grist is pale ale, amber, chocolate and smoked malt while the hops are Chinook, Simcoe, Magnum and Amarillo with Columbus used for dry hopping,  With 68 EBC and a nice round 100 EBU it comes in at 6.5%.

There's a touch of roast in the nose along with a hint of liquorice sweetness and underlying resiny hops. As you drink there's an immediate big hop hit with roast coming through and then the merest hint of smoke. The finish is beautifully long and bitter.  I'm very pleased I have a second bottle of this and will be aiming to get more on my next trip to the Netherlands. Top class.