I've always had a soft spot for De Eem - I first encountered them many years ago at the Great British Beer Festival when I picked up a bottle of something called Rosebud. It turned out to really be a Centennial-hopped IPA and was remarkably good. It was also another milestone on my road to realising that something very interesting was starting to happen with Dutch beer. 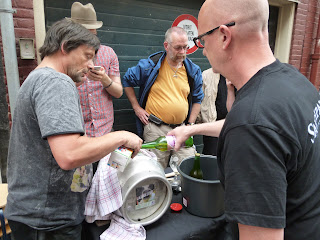 They have been around since 2006 when the company was founded by Amersfoort-based Ruud van Moorst (he's pictured here far left doing something with lambic and yoghurt at the 2015 Carnivale Brettanomyces). For most of the time since then he's been a cuckoo brewer and although my update to Tim Skelton's excellent  Beer in the Netherlands  tells me he was about to get a brewery in the Gelderland town of Elburg I'm not sure that's actually happened yet.

What has happened though is a rebrand as you will see from the original website here and the rather slicker (but work in progress) here. Rosebud became Centennial some years back and I also have fond memories of a session on draft Warrior at Amsterdam's Gollem a  couple of years ago (the one on Ramsteeg - other Gollems are available).

Perhaps the most impressive beer was Dark Hops, tried at the Utrechste Bierbrouwers Festival a few years back and a collaboration with Amsterdam's Brouwerij Pampus (who are cuckoos themselves). This called itself a black IPA but tasted deliciously barrel-aged. It was memorably good.

So then, Dorstig (or "Thirsty") which, at 3.5% is certainly an easy-going thirst quencher.  There's Plisner and Munich malts in the grist so its very pale copper rather than golden, and with some malt character to balance out the hops (Warrior, Saaz and Centennial). There's a slight touch of spice on the nose alongside a malt-kiln sweetness and piney hops.  These are all there as you drink but alongside is a peppery hop bitterness that lingers into the moreish finish. Eem have never let me down and this is another winner in my book.

There will probably be nothing on here next week as on Thursday I'm off to Brugs Bierfestival when I'll be wading through this lot supplied by these. Highlights to follow of course.
Posted by John Clarke at Tuesday, January 30, 2018 1 comment:

Every year I make a trip to Bodegraven in the Netherlands to attend the Borefts Bierfestival hosted by Brouwerij De Molen (the brewery that arguably kick-started the Dutch craft beer revival). I've managed to attend Borefts since it started out as a fairly low-key affair attached to the annual Bokbier Festival weekend in Amsterdam. I suspect I'm just one of a small handful of Brits who have been to every Borefts and it's been interesting to see it grow and evolve into what is now craft beer central with breweries from around the globe in attendance.  This year marks its 10th anniversary so I won't be missing that.

One feature of the festival is the shop based in the windmill on Overtocht (the brewery used to be there as well but has long since outgrown it and is now located in much larger premises a couple of minutes' walk away).  It usually offers choice, rare and expensive beers from the brewers featured at that year's festival. It's normally thronged by festival attendees splashing the cash.

Those of us with an interest in Dutch beer go elsewhere though. Just down the street is the Speciaalbierwinkel (or Special Beer Shop) run by Jan Kraan. Jan specialises in Dutch beers with over 700 in stock at the last count. Rarities from across the Netherlands can be found on his shelves - he drives across the country to collect some of them. I usually get to Bodegraven in good time to allow myself at least 30 minutes browsing here.

Among the beers are the Kraanwater beers from Jan's own Brouwerij Kraan. This is a neat play on words as kraan is also Dutch for 'tap' - hence 'tap water' (it is of course also a hostage to fortune...). The beers are produced on a small brewing kit in a back room of the shop. A couple of years ago I was lucky enough to get a quick look at the brewery (and can't find my photos...) and it seemed to be quite an improvised affair. At that time Jan had plans to move to a bigger site elsewhere in Bodegraven but this appears to have fallen though and he's still there brewing about 200 litres a fortnight.  Quite a range is produced in a variety of styles and this, Kraanwater 7.2, is a black IPA at, you guessed, 7.2%

It looks the part with a black body and tan head but I have to say it was all perhaps a little bit too light for me.  The nose has hints of malt and that's there again as you drink along with touches of dark berries, a smidgeon of dark chocolate and some cola notes too. Some roast comes through and that lingers into the light and spritzy finish. Perfectly decent I thought although a bit more oomph wouldn't go amiss. I'll be back at the Speciaalbierwinkel in September and another of Jan's beers will certainly be among my purchases.
Posted by John Clarke at Wednesday, January 17, 2018 60 comments:

Here's an obscurity for you.  There are around 540 breweries or beer firms currently operating in the Netherlands and while the head-turning stars are well known the Dutch beer landscape is heavily populated by concerns like this.  Small. sometimes part-time, operations with a very localised distribution. You won't find their beers on the shelves of the Amsterdam beer shops.

Wildervank is a small village south-east of Groningen and I think I picked this up in a beer shop in that city a year or so ago. So who or what is Brouwerij Wildervanker?  Obviously I first turned to Tim Skelton's Beer in the Netherlands where the update, perhaps unpromisingly, tells me this is a "hobby brewer making a wide range of beer styles with mixed results since 2014"

There has certainly been a wide range of styles at the brewery's RateBeer entry shows.  Wildervanker Brouwerij was launched in August 2014 and is the project of ex-lorry driver Jan Abbingh, and who had been home-brewing for 25 years. The rather neat little brewery appears to be located in a converted large garage as can be seen from the photographs here. Apart from his own range of beers Jan also produces a range of Borrie Craft beers which has its own Facebook page but of which I know absolutely nothing.

So what about this then? At 9% it's perhaps a little low strength for the style  and pours a very dark brown. The nose is light with touches of dried fruit, caramel sweetness and also a slight vegetable note I'm not sure should have been there.  Drinking though it's quite full-on with caramel, toffee and sweet dark malts. Swilling the beer around my mouth I also picked up an odd quinine note and a herbal sweetness that reminded me rather of Uncle Joe's Mint Balls. Above all though there was huge, warming alcohol which lingered long into the finish.

I must admit I'm still not entirely sure I liked this but if I come across another Wildervanker beer I'll certainly give it a go.

I was unlikely to stay away from Dutch beer for long - and welcome to one of the newest stars of the Netherlands beer scene.

The first time I came across Demoersleutel was at last years's Gents Bierfestival which featured a couple of seriously impressive big dark beers and a pretty tasty IPA. "They're a new hot Dutch brewery" I was told.  I subsequently tracked down some of the beers from these self-styled "beer engineers" (the name means 'spanner' or 'wrench') on a trip to Amsterdam and instantly became a fan.

So, who are they? It's a family concern based at the moment in Heiloo north of Amsterdam, although they have recently crowd funded a new brewery which, if my research is correct, will be based in Alkmaar. The family in question is Sjaak and Margreet Zomerdijl and their four sons Max, Pim. Rob and Tom who, I think, are now a little older than their Facebook photo might suggest - they are between 19-24 in fact.

Sjaak was involved in the Vriedenbier Brouwerij which, I suspect, is effectively no more as all of the family's energy is devoted to Demoersleutel. As you will see from the RateBeer page a large range of beers have been produced since they were launched in early 2016 - all to great acclaim.

The Vriedenbier kit and premises have been used so far but the new brewery is now being installed and the new premises will also include a barrel ageing room with up to 300 whisky. bourbon, rum, cognac, and armagnac casks among others.  Not only that but I see from today's announcement they are also into the sour side and so will be appearing at this year's Carnivale Brettanomyces. I must say I'm looking forward to trying their sours as when the Bierista website went to see them in May last year there were some 50 barrels of these awaiting bottling.

So, what are the beers like? My tasting notes from Ghent rave about the dark beers ("chewy and delicious") but I was a bit more circumspect about the IPA which had a vanilla note that I wasn't sure should have been there. Then I was told that they'd more or less gone back to the drawing board with the big hoppy beers as they, too, weren't totally happy with them. It looks like some have been released since so hopefully everything is now back on track.

And Motorolie ("motor oil") 10? Well, this is a big old bruiser of a Russian Imperial Stout at 12%. Lots of malts in here (including chocolate, caramalt and black malt) so it pours almost black with a dark brown head.  As you may expect the nose has the required chocolate, roast and espresso notes. The body is smooth and initially rather light - almost as if someone has dropped splash of cream into a black coffee - which then builds into a complex multi-grain finish with black coffee and bitter chocolate bouncing ahead. This really is very good.

De Moersleutel already export their beers (some has even gone to Australia) so its about time we got some here in the UK. Any takers?