Beer of the Week

I think this may be the first American beer to feature in the intermittent history of this blog - and I have to admit it was something of an impulse buy. 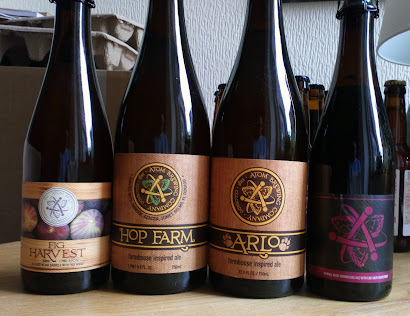 Those who follow me on Twitter (@Beer4John) will know that over the past few weeks I've browsed a few beery webshops and bought the, ahem, occasional bottle or two. One site I can particularly recommend is Etre Gourmet, and the last time I was 'window shopping' I noticed a range of wild/sour beers from a Stateside brewery new to me. I splurged on all four and if this one is anything to go by, I think I've made the right call.

So, Atom Brewing. Well for a start it's not to be confused with the UK's own Atom Brewing, based in Hull (coming soon here) - unlike their US namesakes I doubt they will be a "farmhouse inspired brewery" nor be "committed to mixed culture and spontaneous fermentation". Mind you it would be an exciting development if they were.

Atom Brewing's shiny new website seems a little short on the brewery's history but it looks as though it started up in 2015, and for most of that time has been based in Erie, Colorado, about 12 miles from the better-known, or at least better-heard-of, Boulder. It won't be in Erie any more though. In April this year the owners purchased a 45 acres farm in upstate New York and have moved the whole operation there. This should allow them to expand production as it seems the new brewery building is 2,000 square feet, rather than the 500 square feet back in Erie.

Over the course of four and a half years we transformed the property into a small Hobby Farm and Brewery, growing as many ingredients as we could to use in our beers on the property. We also moved to a unique way of brewing by having a 5 barrel copper kettle built which we brewed in over open wood fire. Within a year we added on by having a copper mash tun and coolship built, this was the beginning of our spontaneous beer program.

Word started to spread about this little brewery in Erie Colorado, who brewed in a copper kettle, using wood fire and wild yeast harvested on the property. Before we knew it, people were asking for our beers in places like Belgium, Italy, France, the Netherlands and Australia. 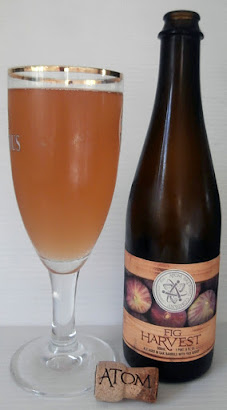 It was reading all of this that made me think these beers were worth a try (mind you, if you don't do sour beers it would be as off-putting as I found it attractive). Which neatly brings us to Fig Harvest (6.5%).  The basic premise you'll get from what's written above  while the attractively tactile label provides some more background:

Farmhouse base beer aged for six months in neutral oak barrels. The beer was then moved to one of our custom built "Punch Down" barrels and added two pounds per gallon of figs. The fruit was punched down twice a day for two weeks then left to referment for two months.

Must say, I like the sound of a "punch down" barrel - I'm sure it could be a great stress reliever.

Cutting to the chase now, what's it like? The nose certainly has an appealing sharpness - although like many non-lambic spontaneous/wild beers perhaps lacks some of the depth and refinement you'd get from a Payottenland beer. The briefest balancing hint of figgy sweetness also comes through which, for me, adds to the appeal.

It pours a pale hazy orange and the refreshing sharpness continues throughout - with more of that background hint of sweet fruit just poking through. I wouldn't say this was particularly figgy, but they certainly bring something to the party. Everything hangs around for a while on the palate too - it's not one of those beers that makes its excuses and leaves early.

So, that's a thumbs up from me and I'm looking forward to trying the others, one of which, Blend One Beer Wine Hybrid, sounds particularly interesting.

Beer of the Week

The bilingual heading here reflects both the origins of this beer and the slightly split personality of the brewery itself. 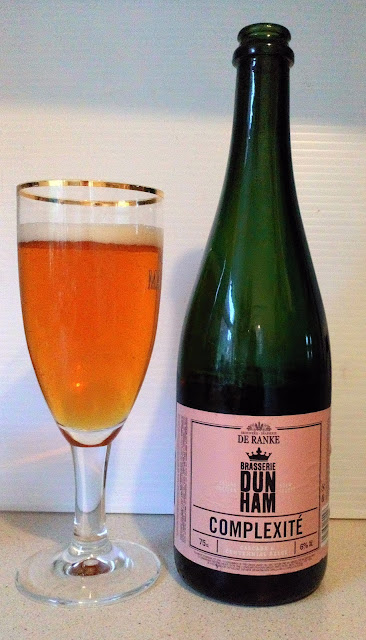 The Flemish-sounding Brouwerij De Ranke is in fact located at Dottignies, in the French-speaking Belgian province of Hainaut (possibly the spiritual home of modern-day saisons, but that's another story). It started in 2005 and was set up by Nino Bacelle and Guido Devos (who sound neither Flemish nor Wallonian) and since then has quietly made its mark as one of the best breweries in Belgium. Although, like others who quietly go about pursuing excellence, De Ranke has largely remained below the radar of the international craft beer geekerati. Which is no bad thing, to be honest.
All their beers have a touch of class. The dry Saison de Dottignies (5.5%) is a classic of the style, Noir de Dottigines (9%) is a hoppy Belgian porter while Père Noël (7%) combines festive strength with restrained but balancing bitterness.
There's also an entertaining line of accomplished sour beers, all of which only appear in 75cl bottles (which is very Wallonian). Cuvée De Ranke (7%) is a blend of a stock blond ale with lambic, while Kriek de Ranke (7%) is similar with cherries. In recent years the brewery has released Vielle Provision, which, or so I was told, is the neat version of the stock ale that goes to make Cuvée.  They've dabbled in lambic production too, with the release of Mirakel (5.5%) a gueuze-like blend of two Payottenland lambics and their own Spierelambiek, named after a small river running near the brewery. Another recent release has been Wijnberg (5.8%), their take on a Flemish Oud Bruin.
So far, so Belgian. However....
As the Good Beer Guide Belgium will tell you, De Ranke pioneered the use of hops in Belgian brewing - that is to say, they were the first to produce beers with a notable hop profile. They did, and do, this using locally grown hops, and using only whole hop cones. Early stand-outs, which are still with us today, were the elegant XX Bitter (6%) and the herbal hop-tangy tripel-esque Guldenberg (8.5% but doesn't really show it). Over the years this side of things has been extended to include the sessionable (not a Kölsch) Simplex (4.5%), the softer and fuller XXX Bitter (6%) and the annual Hop Harvest (6%) using freshly harvested green hops. 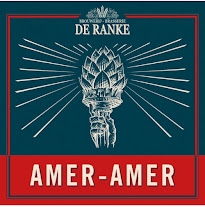 Which leads us, to Complexité. This was launched early last year and is a collaboration with Canadian (well, Quebecois) Brasserie Dunham , which was founded in 2011 and since when has produced a large number of beers  (there are no fewer than 359 entries on the RateBeer website). I don't know how it all came about but the end result is a deliciously impressive American IPA with a Belgian accent. It's a drinkable 6%, and combines (Belgian-grown!) Cascade and Centennial hops in a masterclass of how to use them with the Centennial providing a firm underpinning bitterness.  The Cascade was also used to generously dry-hop the beer although my bottle was perhaps a year old so some of the fresh aroma may have dissipated.
Like many of the De Ranke specials, this only came in 75cl bottles but good news! The beer has now been taken into the permanent range as Amer Amer - and is available not only in 33cl bottle but also 20l kegs so this is one I'll certainly be looking out for on tap when I'm next in Belgium.
Posted by John Clarke at Monday, August 03, 2020 16 comments: