Most beer enthusiasts visiting Amsterdam will have paid a visit to 't Ij. It's housed in an old bath house next to a windmill which is something of  a local landmark. It's certainly a good point of reference if you are heading there by bus (no. 22) or tram (nos. 10 and 14). On a fine day it's also a pleasant walk from Centraal Station and sitting outside on the terrace, beer in hand, is one of life's pleasures.


I first visited the 't Ij Proeflokaal back in 1994 (the first time I visited Amsterdam in fact) and it's been interesting to see it evolve over the years. Back then it was what might be described as "shabby chic" and was also on the small side with an overflow in the basement. The brewery could be glimpsed through some doors behind the bar as I recall. Today it's expanded to fill more of the bath house premises and is smart and modern. 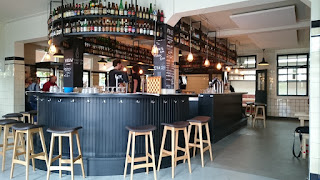 The full 't Ij core range is available on tap alongside one or two specials - there was a black IPA on tap last time I dropped by (and was enjoyed with a plate of ossenworst, for me another essential ingredient of a visit here). If you've not yet been do make an effort - the Proeflokaal is open every day from 2.00 pm until 8.00 pm.

The brewery is also something of a survivor. It was one of the early pioneers of the Dutch beer renaissance and opened way back in 1985. The core range has remained the same - a vaguely Belgian influenced range of beers running from Natte at 6.5% to the powerful 9% Columbus, along with an even more vaguely Czech-influenced Plzen. In the early years it has to be said the quality bounced around a bit too much but happily these issues seem to have been confined to the past. Indeed the't Ij beers have been on something of a roll in recent years. 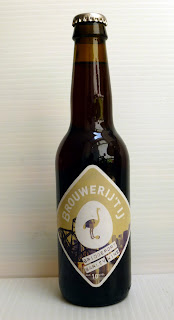 Actually the core range hasn't remained entirely unchanged as the original beers have been joined by a rather fine IPA (7%), the hoppy and sessionable Flink (4.7%) and a range of specials and collaborations (a recurring special is the exceptional Ciel Bleu IPA - but it if you see it).  Most of this has coincided with the expansion of the brewery - and in particular when they opened a second brewery nearby in 2013. One notable collaboration was with the UK's Thornbridge Brewery to produce a tremendous American Wheat Ale which just bursts with hop character - and then we have this little beauty.

Well, not so little, as it's a bit of a beast at 10%. It was brewed in collaboration with Marz Brewing of Chicago, and is named after the area where the brewery is based there. I have to admit that "barley" and "wine" are two words I always like to see on a bottle of beer and when I first came across this about a year ago I couldn't resist.  I was immediately impressed. Upfront is does all those barley wine things I like - booze, depth, fruity richness - and underneath was a firm supporting bitterness (the hop grist includes Amarillo, Nugget, Centennial and Chinook and they all played their part) which added balance and made this hugely drinkable.

Fast forward to September 2015 and Gollem in Amsterdam. It was on the board but not in the fridge so I had a bottle from the cellar as a nightcap. Beers like this usually present better at cellar rather than fridge temperature in my experience and this, combined with some age on the beer, was terrifically good (so much so the first nightcap was followed by a second...). The hops are still there but play a  more restrained role while the booziness has mellowed and matured. It's all just come together. I'm not sure how much more this would improve with further age - it's probably at its peak now so buy it on sight is my recommendation.

Definitely still rocking the shabby chic vibe in 2005. My memory is that this was the biggest bar I went into.
https://flic.kr/p/D4kh

Yes, it's only in the past few years they've gradually expanded it and smartened everything up. My recollection is it was fairly small when I first went there but that was over 20 years ago and memory can play tricks of course.

They've expanded the bar area a couple of times. They gained a fair bit of space when they replaced the brewing kit with something more modern and compact.

The food was always great, I think they just updated their menu and it's off the hook. Who would expect delicious pizza at such big events. Not me, but you can get some of the best pizza there. The best San Francisco venues in the area.