This month sees the 36th birthday of the 'new' Opening Times which was revived in June 1984 after a gap of around seven years. In the last post we looked at the Stagger from that inaugural issue and I thought it might be an idea to look at the rest of it as well.
As you can see it was duplicated- each page was typed out on a stencil and then run off mechanically. A lengthy and slightly messy process but which produced something that was acceptable enough by the standards of the times. 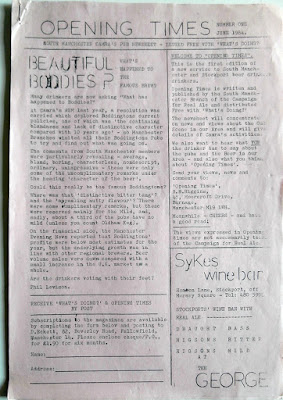 So, as you can see it was produced by 'South Manchester CAMRA' - the branch didn't incorporate  Stockport in its name for a couple or so years. You'll also note that it was "issued free with 'What's Doing'.  What's Doing was a magazine that, in theory, at the time covered most of the CAMRA branches in Greater Manchester. It was produced by the then North Manchester branch and I think Opening Times came about because it was felt that What's Doing didn't give South Manchester a fair crack of the whip.
You won't see copies of What's Doing in the pubs any more as it didn't survive the untimely and very sad death of its long-serving editor, publisher and printer Neil Richardson.  Neil's name lives on though. North Manchester branch became Salford & District and to this day they present an annual 'Neil Richardson Award' to a pub that still maintains the traditions of the genuine community locals that Neil liked so much.
Sad to say, the founding editor of Opening Times, Humphrey Higgins, is also no longer with us, having succumbed to Alzheimer's a few years ago. He was a well-known figure on the Stockport pub scene in the 1980s, famously having a two-pint glass behind the bar of the Castlewood for his Wilsons Mild.
The lead article was about Boddingtons Bitter. An iconic beer, even before it was dubbed 'the Cream of Manchester', there was continuing concern that it had lost much of its old character. It's fashionable these days to blame the decline of Boddingtons Bitter on Whitbread after they bought the brewery but, as I never tire of telling people, Boddingtons managed to cock this up entirely unaided.

So, what happened? Boddingtons insisted the recipe hadn't changed. The original gravity remained at 1035 (as evidenced by successive copies of the Good Beer Guide). It had been a very bitter and obviously highly attenuated beer with all the sugars well fermented out making for a relatively light body, which in turn made it exceptionally drinkable. It became fuller, flabbier and less obviously bitter. One theory is a yeast infection meant that a new strain had to be used which was perhaps less efficient at doing the job. For what it's worth, my theory is they cut down on fermentation time to produce more beer, but who knows?
In its later years Boddingtons could still have its moments. The trouble was it dropped bright very quickly so too many pubs sold it before it was properly good to go. The landlady of my local at the time (Irene Morris at the Greyhound in Edgeley, for the record) decided to add an extra cask to her order each week so her Boddies Bitter had two weeks' cellaring before going on sale, and the difference was remarkable.  Of course it all went tits up after the Strangeways Brewery was closed and production of cask Boddies moved to Hydes. The bespoke Boddingtons yeast didn't like this at all and gave up the ghost but, while it was doing this it caused all manner of quality issues. So much so, that over one third of cask volumes were lost, never to return. After that the writing was on the wall and you won't find a drop of cask Boddington Bitter anywhere today. 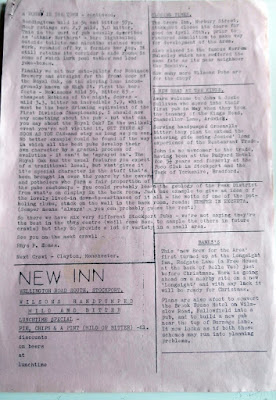 These are largely devoted to the Stagger (or 'A Round in the Town') covered in the last post. There are a few other snippets on page three though.
Three pub closures are noted. The Grove is still standing, in use as offices. The Warren Bulkeley (the only one of the three I actually visited) was largely knocked down although the facade was retained but turned round ninety degrees - the site is now a shoe shop. The Beehive was bought by the local Vernon Building Society which demolished the old pub and built itself a new branch and offices on the site.
New licensees had arrived at the Kings Head in Ardwick. This was a popular and busy pub at the time although it subsequently suffered mixed fortunes and finally closed early in 2008.  It was demolished last year after becoming increasingly derelict.
And finally - the start of Banks's ill-fated foray into Greater Manchester. The old Longsight (which was a right old dump, I can tell you) was bought for the license. It closed in 1985 and the 'new' Longsight was built round the corner on Kirkmanshulme Lane. It closed in 2008 and was knocked down two months later. Of the other two prospective pubs that in Fallowfield never materialised. The one on Burnage Lane, the Milestone (also called the Rising Sun) opened in 1986 and had a life of just 20 years. Houses now occupy the site.

The main story here is the inaugural (Stockport &) South Manchester CAMRA Pub of the Year which was the Griffin in Heaton Mersey. This remains a fine traditional Holts pub although it now has  a large extension on one side (which doesn't impact on the historic core) and Holts plan to add another which will major on food.The presentation night on 11 June didn't go quite to plan as the man with the certificate didn't turn up so we had to do the whole thing again the following month!
The Pub of the Month was the Florist on Shaw Heath. At the time this was run by old hand Allen Stanway who was actually born in a pub - the nearby (and now closed) Church in Edgeley He ran a fine local but when he retired the pub never quite seemed to be the same (although some of his successors were very able licensees).  The pub closed in January 2018 and has been converted into flats.
Neither the New Inn nor Ye Old Vic run happy hours these days. The New Inn doesn't serve cask ale while Ye Olde Vic is a thriving community-owned free house (disclosure - I have a very small interest in it) which sells a wide and changing range of beers. It's almost on my doorstep, too.
The Victoria in Withington continues to thrive, as does the Lass O'Gowrie. The White Swan, the venue for the branch meeting, is now the Ladybarn Social Club, having been sold off by Robinsons.
Finally - this issue of Opening Times mentions 15 open pubs. Of those just seven were still trading prior to the lockdown.  Of the four pubs that took adverts, the Manchester Arms and the George are both closed.

Obviously not a verbatim extract - unless the editor had remarkable foresight!

Was it not Roger Hall that was behind What's Doing ?

Not quite sure which extract you're referring to there.

The (now late) Roger Hall was a major contributor to What's Doing and for many years it was also printed by his company, Stylo Signs.