Welcome to a new feature here at JC's Beer Blog. I have been editing a local CAMRA magazine, Opening Times, for just over 30 years and each month I will be reproducing the 'Stagger' from that time.  So here we go with the Stagger from the July 1988 issue. It covered Clayton and was written by Stuart Ballantyne. The photos show the pubs as they are today. 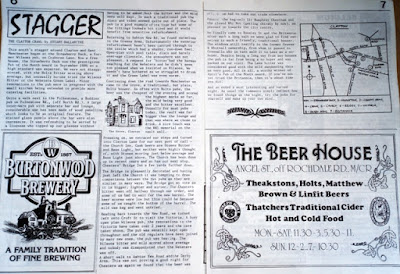 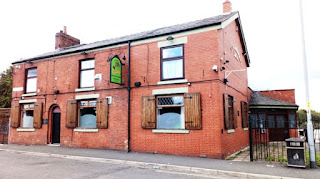 This month's Stagger around Clayton and East Manchester began at the Strawberry Duck, a former Wilson's pub on Crabtree Lane. Now a free house, the Strawberry Duck won the prestigious Pub of the Month award in September 1986 so a high standard was expected. We were not disappointed, with the Holts Bitter scoring above average, but unusually no-one tried the Wilson's Bitter or the Webster's Green Label. Minor renovations to the pub were in progress with the small kitchen being extended to provide more catering facilities.

Quite a walk next to the Folkestone, a Boddies pub on Folkestone Road (off North Road). A large inter-wars pub with separate bar and lounge, considerable use has been made of wood paneling which looks to be an original feature. The stained glass panels above the bar were also impressive. It was refreshing to be served by a licensee who topped up our glasses without having to be asked. Both the bitter and the mild were well kept. In such a traditional pub the disco and video seemed quite out of place. The pub is a good example of its type but some of the fittings looked a bit tired and it would benefit from sensitive refurbishment.

Returning to Ashton New Road, we found ourselves in the Greens Arms. Unfortunately the exterior refurbishment hasn't been carried through to the inside which had a shabby, run-down feel. Open-plan with pool table, disco and barely over-age clientele, the atmosphere was not pleasant. A request for 'bitter' has the barman reaching for the Webster's and he didn't seem too pleased when we insisted on Wilson's. We needn't have bothered as we struggled to drink it and the Green label was even worse. 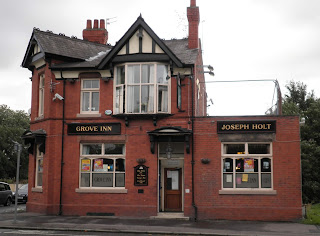 Continuing down the road towards Manchester we came to the Grove, a traditional, but plain, Holts boozer. As often with Holts pubs, the beer was the cheapest of the evening and scored the highest marks so far, the mild being very good and the bitter excellent. Unusually for most pubs today, the vault was far bigger than the lounge and that was where we chose to drink, A nice touch was the WW! memorial on the vault wall.

Pressing on, we retraced our steps and turned into Clayton Lane for our next port of call - the Church Inn. Cask beers are Stones Bitter and Bass Light, but neither were highly thought of, with Stones scoring just below average and Bass Light just above. The Church has been done up in recent years and so has our next stop, Chesters' Bridge Inn a few yards further down. 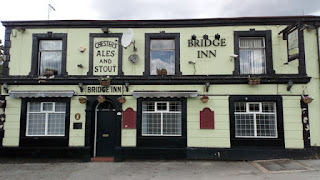 The Bridge is pleasantly decorated and having just left the Church it was tempting to draw comparisons between the two pubs as they are similar in many ways. The Bridge got my vote as it is bigger, lighter and airier. The Chesters' bitter went off halfway through our order, and some of us had to wait for the new barrel. The beer scores were low but this could be because some of us caught the bottom of the barrel. The mild was keg and went untried.

Heading back towards the New Road, we turned left into Croft Street to visit the Victoria. A busy open-plan Wilson's pub, the renovations to the Victoria have taken over two years and the care taken shows. The pub was sensibly kept open throughout and the old regulars have been joined by many new ones, the pub was heaving. The Wilson's bitter and mild scored above average and nobody was disappointed that the Websters was off.

A short walk to Ashton New Road and the Derby Arms. This was  not proving a good night for Chesters as again we found that the beer was off, so we had to take our trade elsewhere.

Passing the keg-only Sir Humphrey Chetham and the closed Why Not (getting thirsty by now), we pressed on towards the city centre.

We finally came to Rowsley Street and the Britannia. After such a long walk we were glad to find ourselves in such a friendly, traditional boozer. The windows still testify to the former Groves & Whitnall ownership, from whom it passed to Greenalls, who in turn sold it to Lees as a no-hoper. Despite being a long way from any houses the pub is far from being a no-hoper and was packed on our visit. The Lees bitter was considered good with the mild surpassing this as very good. All in all, a worthy winner of April's Pub of the Month award. If you've not yet tried the Britannia, then it's about time you did.

And so ended a most interesting and varied night. As usual the comments simply reflect how we found things on the night, try the pubs for yourself and make up your own mind. 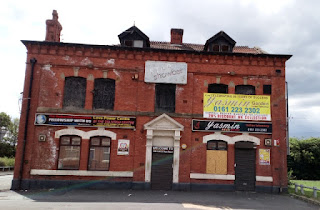 History has not been kind to the pubs of Clayton. Some still survive and among those is the Strawberry Duck on Crabtree Lane. It's won awards as a community local and still serves Holts Bitter.

The Folkestone was closed, burnt out and demolished. New housing now occupies the site. The Greens Arms struggled on and then had a brief existence as the Star Showbar (and you can see the sign on the front of the now-derelict building pictured above). 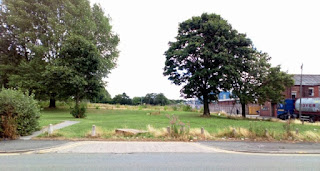 The Grove also continues to thrive as a Holts house and the war memorial remains on the vault wall. No such luck with the Church. After Manchester City moved to East Manchester from Maine Road in 2003, the pub was renamed the Blue Moon. Not that it did much good as it soon closed and was demolished in late 2007. The site is shown here. 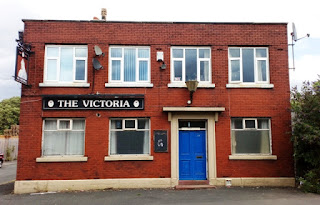 The Bridge Inn remains open, looks to be doing well but no longer sells cask beer. After that it's downhill all the way. The Victoria looks like it should be open but appearances are deceptive. It closed in February 2010 but as you can see the building is in good order.

The Derby Arms traded for longer than most but finally closed its doors five years ago and has now been converted into shops. The sign remains as a poignant reminder of past glories.  Across the road the Sir Humphrey Chetham closed down around the turn of the century and has also been converted to shop premises.

The same issue of Opening Times reported the reopening of the Why Not as the Little Bradford. It thrived in this guise and received a CAMRA 'Pub of the Month' award in December 1992. However the December 1992 issue of Opening Times also included extensive coverage of the threat to its existence by Manchester's Olympic ambitions. It wasn't the Olympic Stadium that saw it off though but the general redevelopment of East Manchester. It's not easy to pinpoint the pub's site but it's probably under the tram tracks at Velopark. 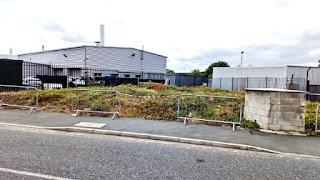 That just leaves the Britannia. This really was a superb local and I have many happy memories of it. When Manchester City moved to East Manchester it was taken over by former City player Mike Summerbee who renamed it Summerbees, revamped it in cafe-bar style and removed the cask beer. It didn't end well. After a short spell as 'Maine Road' the building was bought by Manchester City and demolished in 2010. As you can see the site remains vacant.

I remember leaving my wallet in the Britannia on that evening, but fortunately they found it and kept it for me :-)

I remember when City began playing in east Manchester about fifteen years ago, there was some talk of new pubs opening to serve the match day demand, and as you say there were a couple of attempts at doing so, but I think most fans now drink in pubs in town beforehand and then either walk to the ground or take one of the numerous buses, trams or taxis going there.

Webster's? I'd been in Manchester a few years by this time, but I've got no recollection of their beer at all. But then, I couldn't honestly say I've got any memory of Boddington's Bitter (heresy - or maybe I just came to it too late).

As a Mancunian who knew none of these pubs (I did leave aged nine!) I am nonetheless saddened by this tale.

I knew all these pubs very well as I worked at Clayton Aniline (CIBA) between 1968 and 2005. Now City's training ground! We visited all these pubs at lunchtimes. The Strawberry' was The Crabtree and only half its present size. In later years we just went to the Grove. Other now demolished pubs which we walked to were "Old" Clayton Arms (Clayton Lane), "New" Clayton Arms (North Road), Bricklayers Arms, Duke of Edinburgh, United, Forge Tavern, Fox Tavern, Prince of Wales, Woodman + 1 or 2 others I forget the names. All of these pubs would have been on a 1970's crawl before you got to the Britannia.
Alan Hurdle