The is a country whose burgeoning beer scene remains firmly under the radar of most beer fans. Along with an exploding number of breweries and beer firms the country is also host to two of among the geekiest beer events in .


The Borefts Bier Festival hosted by Brouwerij De Molen celebrates its seventh year in 2015 and after a slow start now has a reasonable turnout from from the . For the record it's 25th and 26th September this year and if you've never been it really is something you should seriously think about if you want to burnish your "craft credentials".


Rather more esoteric is Carnivale Brettanomyces ("a beer festival dedicated to brettanomyces and friends") which takes place in over the last weekend in June.  This year was the fourth event and was also the year it really came of age - more venues, more events, a greater international presence and some high profile speakers delivering the masterclasses. Just look at this: 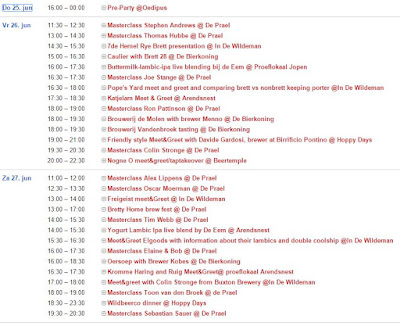 You can get a better look on the website which also has a list of those breweries attending this time around along with details of the participating venues.

Highlight for me?  The big collaboration brew day at Oedipus Brewing on Thursday 25th was a  treat.  While it opened to the public from about , I was invited down by Sander Kobes of Oersoep Brouwerij and arrived with friends at about 12.30.  It was a great chance to meet and greet both old friends and also meet up with the guys from Pope's Yard Brewery, who I'd been wanting to catch up with for some time.  Below the radar in the , they turned heads at the 2014 event when they presented their Keeping Porter. This was to all intents and purposes a recreation of a staled porter from the late 18th / early 19th century and pretty damn stunning I have to say. They sent another version this year  Geoff Latham and Ben Childs turned out to be great guys who are passionate about what they do - and obsessive in their desire to recreate Benskins Colne Spring Ale,  one of the 's great lost beers. That's something to look forward to. Be good to see their beers more widely available in the .

Another treat was meeting Timo Krjukoff, an unassuming 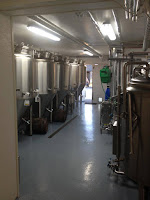 Sweden-based Finn who is the man behind Sahtipaja. Timo told me that he brews at the weekends in his garage. Now this conjures up a certain image I think. Well forget about that.  Here's the brewery (taken from the Sahtipaja Facebook page) and as you can see this is not your average weekend garage setup.  Sahtipaja makes sahti (as you may guess) along with a range or sour beers, mainly in the Berliner Weisse style and from my limited experience these are superbly accomplished beers. I'd certainly be beating a path to the door of anyone who imported them into the .

Timo's straight Berliner Weisse was on the bar at Oedipus and this was impressive enough. His fruit versions were knock-out. The blueberry and white chocolate was perhaps the best beer I had all weekend (and it was a mightily strong field)  while others fell in love with the bitter blood orange (with added botanicals - the aim was to get a campari effect) or the raspberry and cinnamon Röttt met inte Sött. And of course there was the sahti which has long been on my bucket list of beers to try. For those who don't know this is a Finnish farmhouse beer made with a variety of grains, fermented with baker's yeast and filtered through juniper twigs. I suspect the Sahtipaja version is perhaps more elegant than some of the stuff made in the Finnish backwoods but even so while I enjoyed the experience I'm still not sure I actually liked the beer.  The sahti and the blueberry berliner were tried at the new Jopen Proeflokaal in Amsterdam which hosted one of the more unusual events of the weekend - but more of that shortly.

The rest of the brew day was spent sitting in the sun, chatting, sharing bottles and generally having a high old time.  The brewery opened to the public at about 3pm when the bar opened and food was served. I finally lurched off into the night at about 10 o'clock.

The next two days were a round of masterclasses, presentations and "meet & greets" - with plenty of beer to ease it all along nicely.  I managed three of the masterclasses.  Stephen Andrews is an enthusiastic New Yorker who has relocated to Grimstad in Norway where he runs the barrel ageing operation for Nøgne Ø and gave us a run down on barrel ageing and how to do it; Ron Pattinson was entertaining (as ever) on the subject of Berliner Weisse while Tim Webb was his usual good value telling us about the role of sour beers in the global beer revolution. And it really is a revolution - Tim is working a new version of The World Atlas of Beer and told us that the number of countries with a developing beer culture has more than doubled since the first edition. 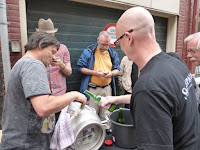 Fitting everything in was impossible but there were two other events I wanted to be at. First was the rather implausible "buttermilk-lambic-IPA live blending" at the Jopen Proelokaal. This was the inspiration of Ruud van Moorst of Bierbrouwerij De Eem whose beers I've enjoyed for some years now. He makes a very enjoyable lambic-IPA blend but this took the process one stage further. Bottles of the beer and buttermilk were poured into a pin which was then rolled up and down the street before being stillaged, tapped and served.  I was braced for something disgusting but it was surprisingly good. I did however pass on the repeat event the next day involving yoghurt and cranberries…

The other unmissable event was the homebrewers' "bretty home brew fest" at the De Prael Proeflokaal. Last year I had some seriously good beers here but this time it was more of a flying visit. What I had to try though were some of the beers from Tommie Sjef Koenen, a young amateur lambic blender and, I suspect, a future star turn.

And that was it. Three days of intense activity. Time to relax at the Nederlandse Bieren Festival in but that's for another day I think.

And the collab from day 1? That's a Flemish Red that's gone into two red wine casks, one to sour and the other to become more "funky".

Welcome to the blogosphere, John, and how fitting to dive in on your 60th birthday :-) And with a post about Brettanomyces too.

One little tip - if you put the post title in the box at the top marked "Post" rather than in the body of the post it makes it easier to link to blogposts and index them.

Thanks Mudgie - I'm still getting to grips with Blogger (positioning photos seems to be trying at times) so there could well be s few tweaks over time.

It's not all gonna be undrinkable foreign muck is it, Clarkster? You are gonna cover some suppable grog?

Yes, most of it will be foreign muck - and often keg filth to boot.

I like it. Nice header photo and colour scheme. Obviously now you are a senior citizen, you are looking to feather the retirement nest. What better way than to write about exotic foreign fizz. The book deal must be just around the corner!

I'm happy with the overall appearance so far. The post about Carnivale Brett could have been better - I ought to have included more about Pope's Yard and at the end I sort of truncated it really. We'll get there.