After Carnivale Brettanomyces it was time to get back to more regular beer – and where better than a beer festival?  Many Dutch beer festivals seem to be one day affairs and often seem to be held on a Sunday, too. Not only that but a fair few are open air and, given that the Dutch climate is not unlike that in the , getting wet is often to be expected.

On Sunday 28th June there were two I fancied – one in , which I have been to and enjoyed in the past, and one in . In theory it was possible to fit both in but after the previous few days something less hectic was called for.  I’d not been to for some time so I found myself at the Nederlandsen Bieren Festival – and very enjoyable it turned out to be. 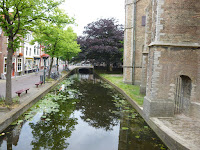 itself is a very pretty little town. It’s sometimes billed as a smaller, and less frenetic, version of and it’s easy to see why with a network of canals lined with gabled buildings. There’s some history to the place too. Vermeer was born here and there is a clutch of historic buildings worth a look. The town is also home to a couple of Deltware factories and the Markt, with its splendid 17th Century Stadhuis, and the surrounding streets are littered with shops selling the stuff (which ranges from the stylish to the unbelievably kitsch).

Anyway, enough of the travelogue let’s get down to the beer. What attracted me to this event was not the number of brewers present but the sheer quality of those present. There were just a dozen but most of the top rank of Dutch craft brewing was represented. There are some images of the programme here to show you what I mean. 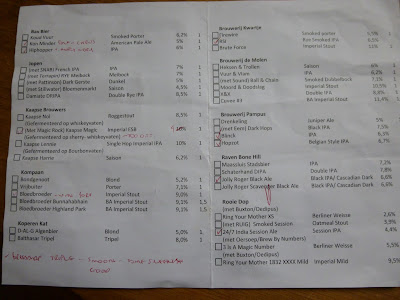 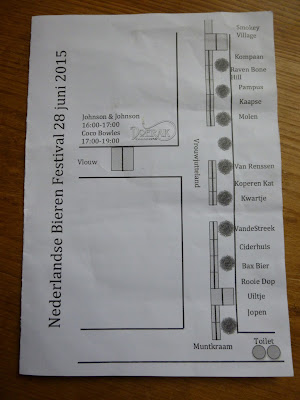 The brewery stalls were arranged in a row down Vrouwjuttenland - which is a street with buildings on one side and a canal on the other (only one man fell in and he arrived in a kayak) .As usual I flitted around at random with no real plan although I made a point of getting to the Het Uiljte stand sooner rather than later (as usual with Het Uiltje queues built up quickly and their beers were among the first to go).  The CC Porter (7.7%) was seriously good. The CC is coconut and coffee, a combination which might not work in less expert hands but here was a terrific beer with a lovely balance between the various elements. OK, you’ve got to like coconut but if you do then this will be a beer for you.

Brouwerij Kwartje was a new one for me. Based in Den Haag they only started brewing this year and if their RIS (Rye Smoked IPA – 6.5%) is anything to go by they are set to really make a mark. Perhaps a bit heavy on the smoke for me this was nevertheless a very well made beer.

Another new-ish name was Bax Bier, a 2014 start-up from . Their American Pale Ale Kon Minder (5%) impressed (more on this one in a later post) while the Hiphopper (6%) was a sensationally good IPA – clean, hoppy, bitter and extremely moreish. The hop grist includes Mosaic, Chinook, Simcoe and Ahatanum so that’s to be expected really.

While I won’t bore you with every beer I tried (including one pour away clunker) justice wouldn’t be done without mentioning VandeStreek  who can always be relied on to come up with the goods. Their Koper (6%), a rye pale ale, was full-bodied with some initial sweetness balanced by the usual dryness that rye often seems to bring to a beer. Beautifully drinkable. However for me the star turn was their fabulous Imperial Red (11%). This was launched last year and has been aged in a red wine cask ( I think it was). My brief notes say “full bodied, rich and very drinkable”. Glorious stuff.

Two other things worth mentioning I think. First there was a cigar and beer matching stall - the benefit of holding an outside festival I guess. Perhaps of more significance was the presence of a cider stall. While it's starting from the lowest possible base there is definitely a growing interest in traditional cider and perry in the Netherlands. That's a trend to watch, I think.

After that it was just time for a beer in the rather good Klooster before a lurch back to the station.
Posted by John Clarke at Tuesday, July 28, 2015